The Ring vs. The Grudge

'The Ring vs. The Grudge' is a 2016 horror film (originally titled 'Sadako vs. Kayako' - and initially, merely an April Fool's gag) which, if you haven't already guessed, pits the main antagonists from said franchises against one another in a fight to the death ... uhm, undeath? Most horrific cat fight of all time?
I understand your potential confusion and sexual frustration, but I assure you that the powers-that-be came up with a solution to this roadblock.

By the way, when I use the term 'franchise', I really mean it. There are currently 13 Grudge and 7 Ring films altogether (American bastardizations included), with shitty sequels and reboots planned as we speak (because fuck taking your time to do something right or original).
Now's probably a good time for me to mention the fact that I've only ever watched two and a half of the aforementioned movies.

I absolutely loved the American remake of 'The Ring' (the cinematography was as gorgeous as anything from Picasso's 'Blue Period'). Its direct sequel was trash and I must've slept through 85% of the American grudge.

Honestly, I'm not even a fan of horror films (blame my attention span, but I blame their boringness and predictability), but I do wish more crossover 'vs' movies would be made.
This is about as fun as this genre gets for yours truly.

The first half of the film is wasted as we witness a young woman watching Sadako's cursed video (WE don't get to see the video itself, of course...) and her subsequent search for a remedy to prevent her impending doom. Yes, we have to go through that old story again, and no, it isn't particularly fun or engaging if you already know how this goes.
We also get a meager splattering of Kayako sprinkled here and there just to string us along before anyone decides to walk out and demand a goddamn refund.

Fortunately -or unfortunately- the halfway point is where we're introduced to the only interesting characters in the entire movie - and likely the entire Ring/Grudge universe - I'm assuming!

Keizo is a young, disheveled man who walks tough and gives no fucks because he's seen some shit.
Tamao is a younger (pre-tween) girl who is blind and hasn't seen as much shit, but, she's psychic (which is actually kind of a sweet trade-off)!
Together, they form a team of 'evil ghost' ass-kickers, and I love them! Their expertise gets me wondering how many evil ghosts they've had to deal with before, though.
Hey! Somebody should give this pair their own movie series...

In his introduction, Keizo crosses paths with whatsherface and her best friend (the "protagonists" of this movie) and decides to help them. Shortly thereafter (and I'm talking within minutes!), Keizo manages to impressively/effortlessly/hilariously capture Sadako's spirit inside a freaking potato sack. Yeah, it's ridiculous, but I'm still loving it.
And *that* is when he gets the bright idea of sending our useless protagonist to Kayako so that both evil spirits can fight it out to see which of them can torture her in cold Japanese hell for eternity.

In hindsight, it really is piss-poor planning to assume that both evil spirits would eliminate each other at the same time, instead of coming to the logical conclusion that the 'winner' would still destroy the main character's soul.

Anyway, here's where I take a quick break to slam down a grade.
Continue reading for a quick summary, followed by ending spoilers. 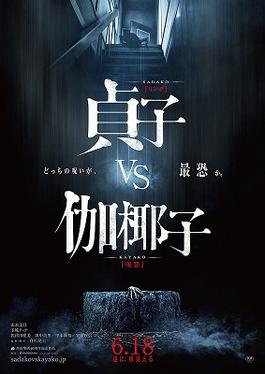 The biggest problem with this movie is its atrocious pacing. Even when it's "good", the characters move at the pace of green algae growing on a sloth's fur, which is especially needless when we all know where this movie is ultimately headed.
It seriously isn't until an hour and a fucking half before the showdown between vengeful spirits commences! What's left of my popcorn is long cold and those tough pieces are already getting stuck between my teeth.

Sure, you could correctly argue that any good movie requires a buildup of suspense in order to get a proper climax, but we've had these movies building up for over a decade, each! We don't need to see Spider-Man's origin story each reboot, and we didn't buy tickets to see a watered-down origin story for a mediocre protagonist whose death and damnation we are excitedly rooting for!

To top it off, the "fighting" is as bare-bones as can be (they barely even look at one another, let alone make actual metaphysical contact) and it's not the slightest bit satisfying.
An actual cat fight would've been far more interesting to watch, and it's a real damn shame because the potential is definitely there.

To finally spoil the climax, the end sequence sees both ghosts run up to each other and collide in nearly slapstick fashion.
This results in a fusion of the two (of course it does!) with the birth of 'Sadakaya'.

While I love the idea and what it could mean for an actual sequel, the whole damn thing falls apart in a largely failed product.
People who are entirely new to both characters may still find this movie worth their time, as may hardcore fans, but if you're looking for something like Freddy vs. Jason, expect to be unimpressed.
The only reason this didn't get a 'Failure' grade from me is because of the introduction of Keizo and Tamao, but even their contributions were far too little, and much too late.

Email ThisBlogThis!Share to TwitterShare to FacebookShare to Pinterest
Were it a girl, she'd be: absurd, bland, forgettable, morose, uninteresting

Spill your guts out and lay them all flat upon the table...

Most Popular This Month